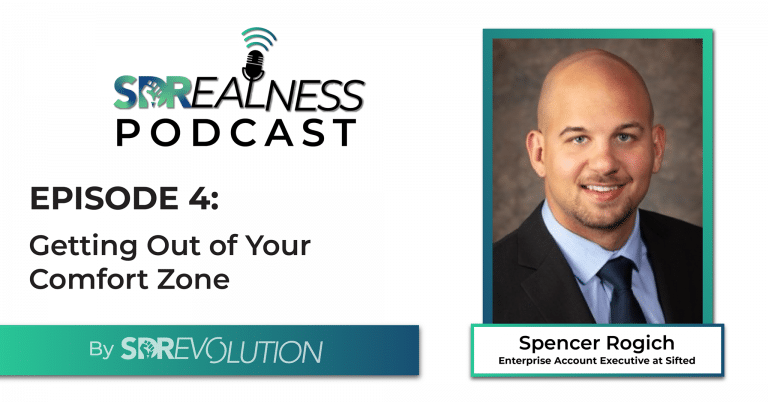 EPISODE 4: GETTING OUT OF YOUR COMFORT ZONE

Greyson: Hello and welcome to the SDRealness Podcast brought to you by SDRevolution, where we talk with sales development practitioners about their take on important topics in the space.

I’m Greyson Fullbright and here with me is my co-host Alex Ellison.

Greyson: This month we’re focused on becoming a leader in the SDR role and today’s topic is interesting. It’s about getting out of that comfort zone so you can actually go out and grow your career and reach that leadership position.

Joining us today is Spencer Rogich who is an Enterprise Account Executive at Sifted, which is a parcel optimization software that’s powered by artificial intelligence.

Thank you so much for hopping onto this Spencer.

Spencer: Yeah, Yeah thanks. Thank you Alex and Greyson for having me on here. I am really excited to share some of the tools and tactics that I have been using that have helped me propel my career forward and hopefully I can give you guys some good nuggets to take away.

Alex: Yeah awesome to have you. To kick things off and frame our conversation, I want to get your take on what it means to get out of your comfort zone just in general and also as an SDR. What does it mean? What does it involve? and Why is it so important to your growth as an SDR?

Spencer: Yeah I mean getting out of your comfort zone is so crucial in yourself and really to anything in your life, whenever you become complacent that’s when you stop learning, once you stop learning that’s when all the problems are going to start happening. For me, this is a huge, huge opportunity for me to get out of my comfort zone, I’m more of a naturally introverted person. I like to kind of stay inside my head, I don’t like to share, I don’t like to be judged by what people may think of me.

So doing things every single day to get your out of that comfort zone is going to propel for success it’s going to allow you to try new things. a big problem that I see is a lot of people are taking in a lot of information about video prospecting or just picking up the phone and dialing, they’re afraid and the biggest way to get rid of that fear is to take that plunge cold water going headfirst into that challenge or any type of diversity that you see and in coming through on the other side knowing you can achieve whatever you put your mind too, that sounds super cliché but it’s true.

Once you dive into that fear, that fear is no longer there and then you start developing that confidence, and that confidence is what’s going to propel you to move forward.

Greyson:  Yeah I think that’s really a good point, you kind of brought up two pieces that I want to touch one. One is about the idea of being uncomfortable isn’t something that’s usually a choice.

You mentioned that once you stop learning that’s when things start going downhill and I completely agree and I think that’s kind of the role especially in sales, you always need to be learning which means implicitly you always need to be uncomfortable in really getting yourself out there trying and practicing gaining experience.

And then the second thing that you brought up that I thought was interesting about how you yourself are a generally introverted person, and I think there is a lot of stigma around people who are just super social and always just like ready to go, go, go and talk to everybody, you know there are different types of people with different motivations and I think it is important to recognize whether you’re extroverted or whether you’re introverted and really however you’re approaching a sales or marketing career, you to be able to find what makes you uncomfortable and that’s going to be different for different people.

So I wanted to kind of transition into some mistake that you have made maybe or others have made when they’re trying to make this shift from being comfortable to being safe to actually actively learning and actively pressing themselves to grow. Have you seen anything out there that people should stop doing or maybe should be aware of?

Spencer:  I think the biggest thing that people are doing is that they’re not following the process, they’re not being consistent. So you see one take away so you try it for one day or maybe even a week and then you don’t experience the results that in your mind you thought that you were going to get.

So I think this being consistent and sticking to the game plan obviously, chart out what your big goals are and how you are breaking it down into smaller pieces and dong that every single day and one analogy that I always like to go back to is, doing bodybuilding and winning bodybuilding shows I see okay what is the outcome that I want to have on stage and what do I need to do to make sure that happens,

Don’t be so attached to what the result is going to be that day, be attached the process of it and knowing that process is going to get that outcome that so I think the biggest thing is staying consistent with it obviously and if it’s not working for you then you can change and you can reroute but don’t give up so early.

Don’t be so discouraged if you don’t see results immediately, anything that’s great is going to take time. Even if you decide that whatever it is that you’re doing isn’t working, you can at least learned from that and use that as experiences to try something new.

Alex: I think that’s so vitally important the consistent day-to-day I guess process that you create for yourself s you can hit those goals.

When I was an SDR, at first I was scared to pick up the phone, most people are, that’s why we’re having this conversation but picking up the phone the first time, you’re still going to be scared the second time, the fifth time, the tenth time and it really doe stake that repetition and the constant day over day over day process to really get used to and get comfortable with these things when you didn’t think you were able to do and all of a sudden you’re making 80 thousand/ a thousand dollars day, you look and say “ That was easy, why was I so scared of it at first”.

I that that is a huge piece of advice that it does get lost sometimes because the SDR role can sort of be monotonous, if you’re looking at that way and if its sort of looking for another goal and its just a no and another no and if you’re looking at it as this process like you’re talking about it does give you a better mental framework for what you are able to accomplish and what you need to do to get to that point.

So to move sort of from that into other top, tips, and pieces of advice, Spencer, do you have other goals and nuggets that you might share maybe even more tactile about how an SDR can be able to get into that mindset and maintain it throughout the process and throughout the journey?

Spencer: Yeah definitely, what you’ve mentioned actually brought something to mind that I’ve done in the past is, getting no is not necessarily a bad thing. If you can make a game of that and go for no and see how many times you can get told no and just make that a game, you’re going to move yourself forward.

As soon as rid yourself of that no, you’re one step closer to getting yourself that yes. Another interesting thing to think about is fear and excitement is essentially the same exact feeling. If you’re enjoying that fear that’s excitement. Like right now I’m scared but I’m super excited to be here and to share my story with, you guys.

And I think not being necessarily afraid of that fear and stepping into to it ad being embraced by that fear is a huge thing and thinking, “okay what is this emotion I’m feeling, how can I turn this emotion into something positive” and if the biggest fear is getting a ‘NO’ then that’s a checkmark on the game and your one step closer to a yes.

You’re essentially making your cold calling tactics a game, that’s all it is it’s just a big game that you’re playing. You’ll get no’s, you’ll get yes’s but either way, you’re winning.

It’s almost like the unknown, that door beyond it’s just so terrible for people but if you take it a step back and kind of see that big picture of like, it’s not about that one call and that one outcome it’s about me and my ability in my process that’s going to create enough yes’s for us to win.

And not worrying about or getting stuck and lost in the weeds trying to worry about a no or worry about you’re not going to perform in a certain aspect of your role so I think that’s awesome advice.

Spencer, thank you so much for joining us today to talk about what it means to get out of your comfort zone as an SDR before we close out, where can people find more about you and about Sifted?

Spencer: You can find me on LinkedIn just Spencer Rogich, and if you want to learn more about Sifted and what we can do for you in technology space for transportation at Sifted.com and you can converse with me there.

Greyson: Awesome. Well cool, Spencer thank you very much. This has been Alex and Greyson for the SDRealness Podcast. Until next time SDRs, keep it real.

Spencer: Thanks guys, see ya.